"Beaver Roundup: A Reminder of Home"

THE VIEW FROM OUT WEST


Beaver Roundup: A Reminder of Home


At about noon on March 1, I was sitting in our bayside apartment when my cell phone chimed. It was a text message from Yvonne at the local flight service station where she works: “At 2pm there will be a candy drop from an airplane, downtown! Don’t miss it!”


Yvonne knew I was hunting for good photo ops at the annual Beaver Roundup celebration. I’d already photographed several activities but hadn’t even noticed this one on the list of events. 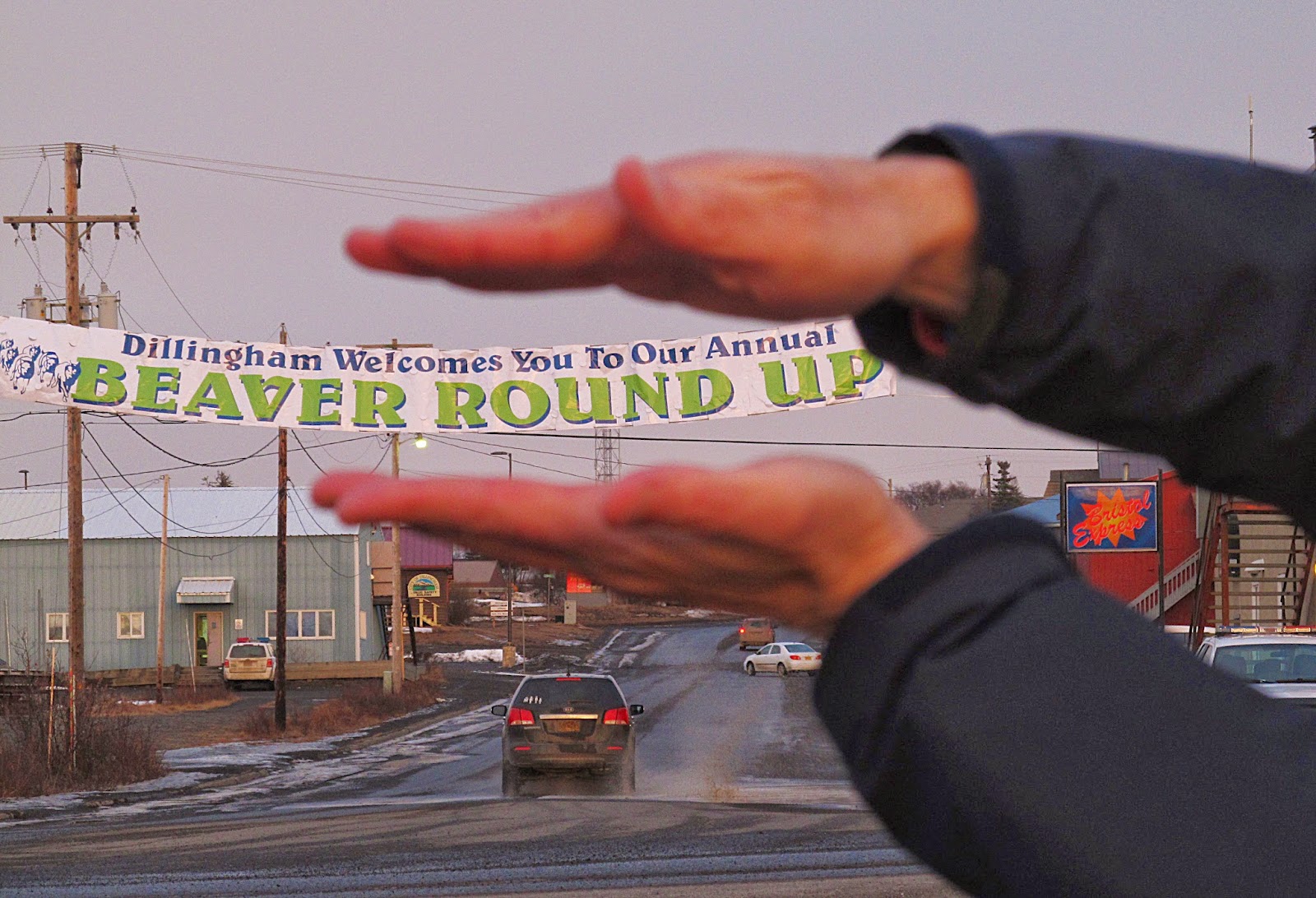 When I texted back for clarification, she answered swiftly.


She’d spoken to the pilot, who would be dropping in low over Dillingham with his little red Super Cub. He was scheduled to drop candy, along with a slew of colored balls that kids could redeem for cash, near the local lily pond (near the Fish & Game office) at two o’clock. Since Yvonne had specified “downtown,” however, I figured that the venue had been changed because unusually warm weather had created a layer of overflow on the frozen pond. At 1:30, I strode out the door, two cameras at the ready.


On a curving section of an oddly deserted Main Street about 10 minutes later, I leaned against a creosoted power pole and waited. At 2 p.m. there were still no crowds; nevertheless, I heard an airplane, and soon a red Super Cub was aiming straight for downtown, past the pond and directly above the street on which I was standing … and onward, without so much as a Tootsie Roll spiraling to the ground.


I watched as the plane roared out over Nushagak Bay, made a graceful, sweeping left-hand turn and angled for the city water tower. It dived low, as if to land, and I swore I heard children cheering. Then the plane was rising again, heading back toward the Dillingham Airport.


Just as I thought I’d somehow missed the whole thing, however, the plane turned again and headed back into town. Once again it flew over my position, turned above the bay and aimed for the tower. Once again I heard children cheering.


On the off-chance that there might be another encore, I began running. Past N&N Grocery, left, past the hardware store, left, past the bank, right, past Bristol Bay Campus and Dillingham High School, right. There, at the far end of a long fenced-in playground, stood the water tower. Inside the metal perimeter surged a herd of children, brandishing plastic grocery sacks already heavy with treats and colorful plastic balls.


I raced for the scene of the action just as the plane swooped again in front of the tower and laid down another volley. Screaming, happy children sloshed through snow and ice and wet grass, grabbing for goodies on the ground. I huffed and puffed into position, and my photographic efforts were erratic and disappointing.


Then someone near me said the plane was coming back one more time.


And thus it was that I witnessed (and finally photographed) the last candy drop on one of the last days of the five-day, 56th annual celebration known as Beaver Roundup.


All week, I’d been having flashbacks to my life in Southcentral Alaska: eating beluga burgers and cubes of blubber at the old Kenai Days barbecue, watching the parade and rodeo during Soldotna Progress Days, helping my kids collect candy during Kenai’s Fourth of July parade, watching the ceremonial Iditarod start and running with the reindeer at Fur Rendezvous in Anchorage, marveling at the ice sculptures at the Peninsula Winter Games.

Beaver Roundup was like all those things in one neat little homespun bundle.


Despite the fact that poor snow conditions—i.e., almost snow at all—cancelled the traditional sled dog sprint races and all the snowmobile events, the rest of the show proceeded as planned. Cars and people thronged Main Street for about 30-40 minutes of parade action and flying candy, which children and adults scuttled in and out of the street to extricate from the puddles and slush. The costume-centric Fun Run was brief but energetic, as was the outhouse race. I acted as a taster for the pickled salmon and agutuk (Native ice cream) competitions. I purchased Beaver Roundup buttons. Yvonne and I attended the dinner show called Dilly Capers and the chili and chowder cook-offs (again as tasters), the local crafts fair at the senior center, and the end-of-week fireworks display at the harbor.


For most of the winter, the action may be slow in Dillingham, but during Beaver Roundup the energy is palpable and frenetic. Everybody, it seems, comes out for at least one event, be it Frozen Turkey Bowling or the Traditional Foods Feast, live music from the New Stuyahok Band or “Dillingham Idol.”


As it is on the peninsula, such events are largely celebrations of community. In Dillingham, it is also a chance to kick the economy in the pants during an ordinarily sluggish time of year. Both Kenai Days and Soldotna Progress Days were engineered by Chamber of Commerce types intent on promoting their towns and businesses. For a while in the 1960s, Kenai used the time to hype its Beluga Whale Hunt Club. Soldotna, excited by the nearby discovery of oil in 1957, jumped on the notion of “progress” to indicate an end to its days of dormancy.


Beaver Roundup, like Fur Rendezvous, originated around the idea that late February/early March was a traditional time for local trappers to bring their pelts to market. Most of those trappers had dog teams, and it was only natural for some competition among the teams to evolve. At the very first Beaver Roundup, 26 teams battled for honors.


Over the years, the celebration grew into a multi-day affair, and the variety of events greatly expanded. Snowmobile races gradually superseded sled dog races in popularity. Food events abounded, as did various games of speed and chance. Now at least one Outside comedian is flown in for a couple of shows—one family friendly, the other rated R—and BRU raffles produce prizes ranging from hooded sweatshirts to new snowmobiles and stacks of cash.


Of course, not every new event survives its debut. At BRU a number of years ago, someone thought it would be a good idea to have two airplanes compete to see which one could break the most balloons with its propeller. Fortunately, no one was seriously injured.


Despite the uncooperative winter, Beaver Roundup, like all those other celebrations of self, reminded everyone here of the spirit of community and the aspects of western Bristol Bay that make it unique. And that, I think, is the essence of such things: These events, unlike the glamorous and star-studded Parade of Roses or Macy’s Thanksgiving Day Parade on television, are filled with real rural citizens, coming together with everything they’ve got.


Local residents make the floats and drive the cars and toss the candy, and if our brief parades sometimes seem a little hokey and jam-packed with ordinary folks, it’s because that’s the way it’s supposed to be. That’s who we are—the residents of rural Alaska (and small towns everywhere), holding a virtual mirror up to ourselves and doing the best we can.
Posted by Clark Fair at 2:24 PM No comments:

Clark Fair
Every day I learn something new and discover just how much more I don't know. One thing I'm sure of: Life is worth living, and one should never be too sure about what will happen.